[Editorial Note: I’m posting this on behalf of Celebrate Green! Info at bottom]

March can be a drab month–waiting for winter to end and the first signs of spring to emerge. That’s why, whether you’re Irish or not, celebrating St. Patrick’s Day is a cool idea–especially if you make it eco! Here are some simple, fun, affordable ideas for you and the family that will make those not included green with envy!

Lynn Colwell and Corey Colwell-Lipson are mother and daughter and co-authors of Celebrate Green! Creating Eco-Savvy Holidays, Celebrations and Traditions for the Whole Family, available at www.CelebrateGreen.net

St. Patrick’s Day isn’t the craftiest of holidays for me.  Let’s face it.  How many shamrocks can you stand to make out of green construction paper?  I’d much rather be cooking corned beef and drinking a tall mug of Guinness!

But since Caley (one of the editors of FaveCraft) asked me to provide a St. Patrick’s day DIY, how could I say no?  Last year, I had the opportunity to actually meet Caley in the most unlikely of places.  DUBLIN IRELAND!  I was there for the U2 concert and she had emailed me about contributing to the website.  We ended up having tea in Temple Bar and talked a lot about what influenced our crafting.

So I guess it’s fate that since we met in Ireland I’m providing a St. Patrick’s Day DIY.  The only thing I could think of was a terrarium.  I’d made one with a little fimo clay gnome some years back and I thought switching out the gnome for Lucky the Leprechaun would be perfect.  However, living a mile high in a little town in Montana doesn’t exactly provide one with a wealth of houseplants for a terrarium.  How about NO plants at all!  Not this time of year.  I was reduced to using some dried moss I’d stored away from a trip to Idaho and running to the grocery store for alfalfa sprouts!    That’s what living in a small town does to you.  You learn to improvise and use what you have!

This is a simple project and one that soon sparked my own imagination when I thought it’d also be fun to start your own indoor sprout herb garden.

Lucky is easy to create.  You’ll need green orange, black, yellow, and flesh colored clay to create Lucky.  And if you’re wanting to create the rainbow for the pot of gold, you’ll need white, blue and red clay.  I found a little glass jar at the thrift store.  If you’re actually making a terrarium you’ll need some carbon (found at pet stores) and some potting soil and a small houseplant.

Construct Lucky.  I’m sure most of you can look at him and figure it out for yourself, but I’ll write the instructions anyway.  Remember to wash your hands when changing to different colors of clay as they can intermingle with each other.  I rolled out the hat in green clay to look like a tall cylinder.  Then pinched out the bottom brim.  Roll out a thin small piece of black clay . Flatten down and wrap around the top portion of the hat.  Then make a yellow buckle.  I formed a tiny square, flattened it and used a toothpick to shape the outline of the buckle.

Using flesh colored clay, roll out a ball that will be Lucky’s head.  Make a couple of eyes with black clay and a nose from the flesh colored clay.  I simply rolled out two small balls of black and one of flesh.  Then attached them by pressing down with a toothpick.

Now, you’ll want to make the body.  Pinch off a large portion of the green clay for Lucky’s chest and roll it into a large square shape.  Pinch off four smaller pieces of green clay and mold them into two arms (sleeves) and two legs (pants).  Attach them all together.  Pinch off one small piece of black clay for Lucky boots.  Attach this to the bottom of his pants and roll the end of a toothpick in the middle to make it look like a pair of boots.  Next roll out two small pieces of flesh colored clay and roll into balls.  Attach under his sleeves as his hands.  The beard is made of orange clay and shaped by making a long ‘V”.  Attach it to Lucky’s face, use your toothpick to make his mouth and use the ends of the toothpick by dragging it on the clay to make it add ‘hair’ texture.

Make your pot of gold by rolling out a ball of black clay and pinching the top out for the rim of the pot.  Then roll out a small piece for the handle and attach.  Make tiny balls of gold and put them inside the pot.  Make your rainbow by rolling out different colors.  Attach all together and flatten.  Then attach the rainbow over the pot of gold.

There you have it!  Lucky the Leprechaun Terrarium -or- Herb Garden!

As a current inhabitant of Dublin, I am particularly excited about St. Patrick’s Day (even if none of my Irish friends are). This will be my second St. Patrick’s Day in Ireland, and I plan on doing a better job this time around of attending events in the four-day-festival the city now holds. Though I will probably avoid the drunken chaos of the Dublin parade, I have to hear some traditional Irish music and see some Irish games (hurling, Gaelic football). In the spirit of St. Patrick’s Day, here are our favorite St. Patrick’s Day craft projects from all over:

Kraken Crafts (love the name!) shows us that lovely St. Patrick’s Day crafts can also be easy. She made this shamrock garland with the help of fusible interfacing. This St. Patrick’s Day Afghan knitting pattern is a really neat project from the Aranknits list. Each month, someone different designed an Irish-inspired afghan block, until there were 16 different blocks to make up the afghan for St. Patrick’s Day.

Try making these shamrock boutonnieres from Martha Stewart. She does everything so well. 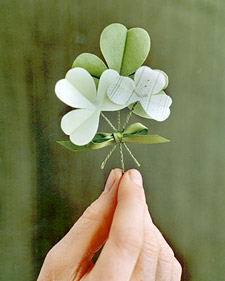 This cute fabric Shamrock tutorial posted at Sunshine’s Creations is made by creating yo yos – so easy and really great to use as decorations. The site suggests making garland out of them! Fabric Shamrock made with Yo Yos by Sunshine Creations

This sparkly Four Leaf Clover Brooch by A Fanciful Twist  is so bright and colorful I think you could wear it to bring you luck all year long! If you need a little inspiration, we have some great projects over at FaveCrafts for the upcoming St. Patrick’s Day and Easter holidays.

How are you going to celebrate National Craft Month?

Put on your sombreros and get out the maracas because Cinco de Mayo is this weekend!  If nothing else this holiday is a great excuse to throw a fantastic party, complete with themed food, drinks and of course crafts!  And because it falls on a Saturday this year, that’s just one more way of the […] 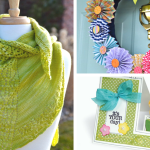 It's FINALLY starting to not be horribly cold outside and I'm just itching for spring to be officially here. To me, spring means putting away my … END_OF_DOCUMENT_TOKEN_TO_BE_REPLACED

We are excited to present a new eBook for Mother's Day, put together completely with the contributions of some very talented craft bloggers. These … END_OF_DOCUMENT_TOKEN_TO_BE_REPLACED