Red Heart is proud to be partnering with Jimmy Beans Wool in sponsoring Stitch Mountain at the U.S. Ski and Snowboard Association (USSA) events in Canyons Resort in Park City, UT and Mammoth Mountain, CA.

Jimmy Beans Wool has signed a partnership with USSA to become the first ever-official yarn, knitting and crochet supplier to U.S. Snowboarding and U.S. Freeskiing. This is a great way to build awareness of yarns and the crafting industry, which is where Red Heart comes into play.

Jimmy Beans and Red Heart partnered to create “Stitch Mountain”, a campaign to encourage people to be creative and crafty on and off the slopes. Yarn for the campaign and the athletes will be provided by Red Heart.

“We are thrilled to have created a relationship that will not only publicize the needlearts industry, but also combine two of our passions, yarn and skiing,” said co-owner of Jimmy Beans Wool, Laura Zander.

Both partners will have a sampling tent at Canyons Resort in Park City, UT and Mammoth Mountain, CA.

…of your awesome crocheting skills and your crafty generosity! As you might remember from Caitlin’s post a few months back, several of us at the FaveCrafts blog are knitting or crocheting scarves for Red Heart’s 2012 Special Olympics Scarf Project. To participate in this project, you only need to knit or crochet a scarf 5 feet long and 6 inches wide in Red Heart’s official 2012 Special Olympics colors: Soft Navy and Cherry Red or Really Red. The scarves are then distributed to the athletes, coaches, volunteers, and fans to show their spirit at the Special Olympics.

I just finished my scarf last week, and I wanted to share it with all of you. I would love to see your scarves if you’ve already worked on them. If you haven’t started a scarf yet, maybe my scarf will inspire you to get hooking! When I agreed to make a scarf for the project, I was inundated with other projects, and I just wanted something simple and mindless to work on in my spare time. I chose the Be Proud crochet scarf pattern provided by Red Heart specifically for the Special Olympics Scarf Project. I can’t gush enough about how great this pattern was!

The wave pattern in this scarf was really easy once I got the hang of it. It’s a simple repeat of a single crochet, half-double crochet, and double crochet, and each row is the same pattern. After the first row, you barely have to think about what you’re doing. Even though this pattern was pretty simple, I still learned something from it! I had never changed colors while crocheting before, but the pattern provided clear instructions on how to join a new color at the end of each stripe.

The scarf didn’t turn out exactly the size it was supposed to, but it was very stretchy, so I kind of just bunched and pulled things around a bit until it fit the correct dimensions. I hadn’t crocheted in several months before I started this scarf (I’m more of a knitter than crocheter), and it inspired me to take on more crochet projects! I forgot how relaxing it is to have only one hook and one stitch to worry about at a time. This project was so simple that I even kept it in my car for a while and did a few pattern repeats at each stoplight on my commute (but only while the car was stopped!).

If you haven’t made a Special Olympics scarf yet, think about starting one today! I already had four other craft projects in progress when I started this scarf, and I was worried I wouldn’t have enough time for it, but it actually turned out to be a welcome break from my more labor intensive projects. There are still many months until the deadlines for most states. The earliest deadlines are in December, and you can easily finish one of these scarves in just a week or two, depending on how much time you devote to crafting. You can use one of the knitting or crochet patterns provided by Red Heart, or you can use a pattern of your own choosing. If you’re a little more free spirited, make up your own pattern! As long as your scarf fits the measurement requirements and includes the official colors, it qualifies for the Red Heart 2012 Special Olympics Scarf Project.

Have you made a scarf for the Special Olympics? Tell us about it! 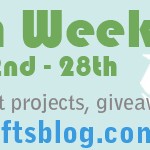 Today is Earth Day, and it also marks the beginning of Earth Week on the FaveCrafts blog! To celebrate this eco-friendly holiday and kick off our special green crafting week, we’re giving you a comprehensive guide to all the best recycled craft ideas we have. From CDs to wine bottles to crayons, you can recycle […] 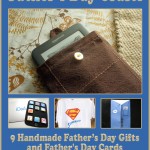 I think that we can all agree that it’s hard to shop for dads. Fathers seem to have every tool, golf club, and all sports gear that they need. This is … END_OF_DOCUMENT_TOKEN_TO_BE_REPLACED 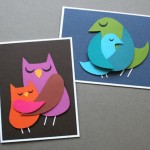 Mother's Day is just around the corner, and I'm sure some of you are at a loss as to how to show mom your appreciation. Believe it or not, most of the … END_OF_DOCUMENT_TOKEN_TO_BE_REPLACED