We are kicking off National Craft Month 2012 with one of our favorite projects from AllFreeHolidayCrafts, The Happy Go Lucky Wreath. This beauty would look great on your door during the St. Patrick’s Day season and comes together quickly with just a few basic supplies. Wreaths are a welcoming sight to visitors of all ages or even just your […]

FaveCrafts has put together two mini Halloween crafts eBooks with the contributions of craft bloggers. Each eBook has 7 craft projects including … END_OF_DOCUMENT_TOKEN_TO_BE_REPLACED 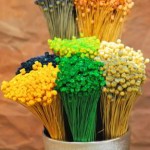 Mother's day is May 9 which may seem a while away, but it will be here before you know it. This special holiday is the time to make your mother feel … END_OF_DOCUMENT_TOKEN_TO_BE_REPLACED