My oldest sister cannot keep her seven-year-old daughter in coloring books. She will sit down and carefully color every page, cover-to-cover. She encourages friends and eager aunts to help her color her coloring books, but she has final say on color choices and overall design decisions. For that reason, I was happy to check out a new site called ScrapColoring.com when the owners contacted us. While many websites are offering free coloring pages, ScrapColoring.com offers some great, easy-to-use technology that encourages the user to color online.  I hesitate to say “child” users because I had a pretty good time coloring a page myself! 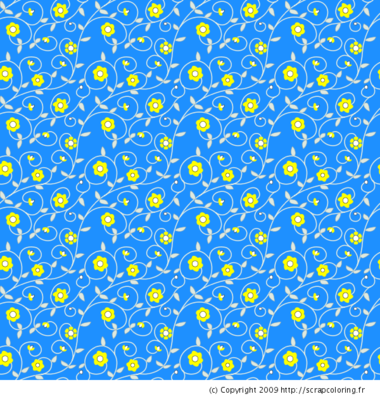 Overall, I’m a fan of ScrapColoring for how it embraces the digital age, encouraging online art-making for all ages. An endless digital coloring book is certainly the eco-friendly choice.

I stumbled across a wonderful blog the other day and luckily, the author was happy to provide her own introduction. Amy of Progressive Pioneer writes,

I am a stay-at-home mom in Salt Lake City, Utah. I grew up in Midcoast Maine and am a country girl at heart. I’ve worked as a corporate ethnographer for product design and strategy firms, but where I’m at right now, however, at home with a baby, a small flock of chickens and something tasty on the stove, is by far my favorite career yet. I love sharing my experiences with urban homesteading, natural family living, bee keeping, attachment parenting, healthy cooking and plenty of DIY projects. We are always creating something whether an outfit for our little one from upcycled sweaters or a backyard sauna from completely salvaged and repurposed materials.  I love the internet as a vehicle for connecting like-minded people and creating communities of support and encouragement. I aim to inspire, validate and encourage other women and families who are making similar choices or perhaps to stimulate curiosity in those for whom some of these ideas are new. I hope you’ll stop by for a visit and share your own ideas, questions, encouragement, stories and thoughts.

Amy has shared some great DIY ideas with FaveCrafts, perfect for the season.

Snowballs for the Bath Here are some more ideas you can view at Amy’s website:

I received a nice email from a woman at ShareHolidays.com asking us to check out their website and was happy to have a look around. ShareHolidays.com specializes in the creation of Christmas stationery.  For crafters, they offer a wide range of Christmas clipart, borders and backgrounds for homemade card projects, scrapbooking and gifts. You can print at home or email your designed Christmas cards if you are trying to save trees. They also have Santa letters which can be created online and shared with family and friends.

The website operates on a paid yearly membership of $19.95/year, although they do offer a 7-day free trial with one free download. Also, while the website clearly specializes in Christmas, they also have designs for New Year’s, Valentine’s Day and St. Patrick’s Day, with more to come in 2010. Basically, membership to the website gives you access to a collection of holiday stationery designs and clipart, which could easily compliment some of your paper crafts.

Yesterday, I wrote about how you can make festive Christmas house crafts for a therapeutic holiday activity. I focused on stockings and garland as two of my favorite holiday decorations. Today, I want to share some of the best ideas I have found on the web for making your own Christmas house crafts.

Recently, Tulip sent out a whole bunch of tie-dye and fabric dyes kits to our blogger friends to review. We are so very impressed with their ideas and fabric-dye skills! You will find all the results below with links to the individual reviews. For more information about the Tulip fabric dye products reviewed, please go here. Better yet, if you are interested in purchasing any of these projects, you can go to ILoveToCreate.com and enter the code “fave1009” for free shipping at the checkout.  Please note that this offer expires 11/30/09 though! 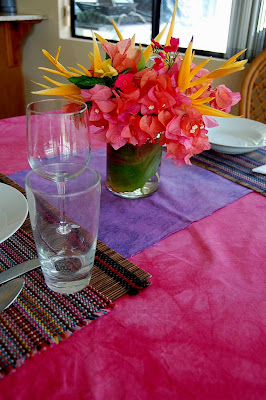 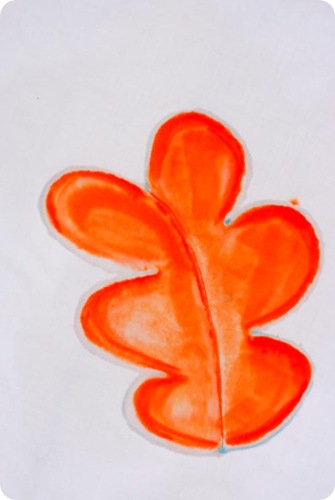 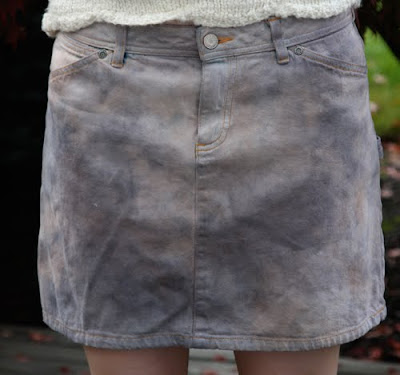 Many Creative Gifts’ Tie-Dye Pieces– Yoga Pants, Onesie and Spiral Shirt (FAR superior to mine) made with Tulip Super Big One-Step Tie-Dye Kit. Make sure to check out Parts 1 and 2 of her tie-dye adventure. 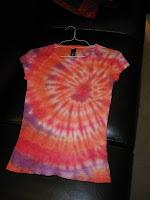 Dee Gruenig has been coaxed out of retirement by Mark Stansell, owner of Stamp A Mania. Dee will be demonstrating her stamp designs at two upcoming shows October 31 – November 1, 2009 in Albuquerque, NM and November 7 – 8, 2009 in Mesa, AZ.  Stamp A Mania is a truly excellent company with the highest standards. In the earliest days of stamping, with her numerous sweeps across America and abroad to introduce stamping at major events, it is possible that Dee had more influence on the rapid adaption of rubber stamping than anyone. Check out www.PoshRubberStamps.com and join Dee’s newsletter list.

I’ve always been a creative sort of person. My mum and gran taught me to sew, knit and crochet when I was very tiny – I was always making a new outfit for Barbie. My mum is a ceramicist, and when she started teaching at College, I became interested in that too. I began to study applied arts in 1996, developing a love of kiln-formed glass, but it wasn’t until I got a job as a technician in a ceramics department that I seriously started working with clay. If you really want to learn ceramics, I recommend doing that job, so many questions – and I was expected to have all the answers. It’s a steep learning curve believe me!

I began studying for my degree at York University in 2006 and during that time I developed a love of bone china and porcelain – not necessarily for its translucency, but for its fine whiteness. It’s like a blank canvas to work on. I also love to use mixed media in my work and will usually add at least one other material. When I completed my degree at the end of last year with first class honours, I decided it was time I set up my own workshop, because it’s pretty hard to do this from your kitchen at home.

My latest work was originally an installation set up as an interrupted laboratory experiment. Traditional ceramic domestic ware was laid out on a table. To the left were stacks of intact plates, mugs and jugs, in the centre a surgical experiment was taking place – the ceramics were being dissected, like an autopsy, to find out what they are beneath the surface. To the right was a huge pile of discarded dissections. It is evident by looking at the cut surfaces that the ceramics is craft through and through – but the scientist has kept on trying. This work forms part of an exploration of the differences between art and craft, and ceramics’ relationship to them. After a lot of research I realised that despite the best efforts of many ceramicists, in most people’s minds working with mud is pretty much always seen as craft, and therefore somehow lower than art. This work is a wry look at this attitude. I am currently working on domestic variations of these pieces; the irony of which isn’t lost on me…

A certain fondness for pretty under-things and maintaining them well made me completely fall in love these Felt Corset Sachets. I’d love to throw a few in my top drawers (pun very much intended). These were found through my blog source of embroidery eye-candy Feeling Stitchy. Flickr user rectangel shares the free pattern for three different Felt Corset Sachets, so check it out!

For easier sachets, we have this awesome sachet project made with regular paper napkins. For lavender sachets you can also use in the bath, check out this tutorial.

Visit new online craft community CraftFail where crafters and DIYers come to share their failed project attempts. The site is new, so there is currently little content, but it seems like it will develop in a hilarious community where members are able to laugh at themselves and their mistakes. I like it already.

Because I’m a bit of a tom-boy, I love jewelry and clothing styles with a slighty masculine touch.  I have a menswear style business vest that’s fitted to my figure and my leather strap watch has a chunky, not delicate, face. On this theme, I have a fondness for chaine maille jewelry. At FaveCrafts.com, we have this project for making flower earrings out of chaine maille.  Right now, I happen to be wearing these earrings by Maille master Melissa Banks.

Melissa Banks is a regular at many of the craft fairs my sister and her fiance attend. I saw her at Renegade in Chicago a few years back. This past Christmas, my sister supplemented my collection of Melissa’s work with the Clover Lariat below. I love playing with this thing as I’m wearing it, adjusting the length. I’m not sure if this is Melissa posing in the image, but I should mention that Melissa has some of the coolest tattoos I have ever seen.

Do take a minute to go check out her very well-organized website, Rapit in Maille.

So you’ve decided to redecorate a room (or even the whole house), but you’re on a shoestring budget. The best way to spruce up your home without spending a lot is to roll up your sleeves and get crafty! With just a few basic skills and materials, you can make beautiful decorations for your […] 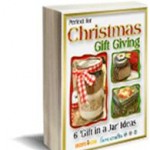 They're trendy, they're easy and they're always a big hit. Gifts in a jar are back in a major way this Christmas! Everyone wants to give them and get … END_OF_DOCUMENT_TOKEN_TO_BE_REPLACED 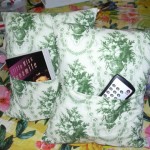 Learning how to make a pillow is a great idea for Mother’s Day. Pillow crafts are quick, easy and make perfect homemade gifts. You can practice your n … END_OF_DOCUMENT_TOKEN_TO_BE_REPLACED